AKSC Officers & Board of Directors

All photos seen on this website are the sole property of the AKSC & cannot be duplicated or copied without written consent. Failure to do so & abide will result in punitive damages. Thank You. 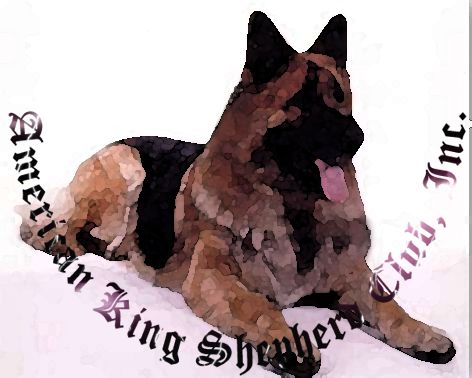 The King Shepherd possesses size, thick dense bone, a well-muscled torso and a strong impressive head.  He is large, rugged, powerful and impressive, possessing exhibiting great endurance and agility.  Developed through a set of demanding circumstances for a purely utilitarian purpose, he is a working guard dog without equal, with a unique ability to protect livestock.  He possesses a keen intelligence and a kindly, while regal, expression. Exhibiting a unique elegance of bearing and movement with purpose; his soundness and coordination embodies the unmistakable intent for which he has been bred.

King Shepherds can be shown with such organizations as ARBA (The American Rare Breed Association), ABIDS (All Breed International Dog Shows), IABCA (International All Breed Canine Association of America), SKC (States Kennel Club) and others. King Shepherd owners are fiercely loyal to their breed of choice. There is an old saying amongst owners’ “They are like potato chips, you can’t have just one”.

Congratulations to the winners and participants of the 2012 AKSC Spring Extravaganza!

Competing in the Breed Ring!

Competing in the Breed Ring!

A few of the Awards!

Thank you Jacob and Debbie Fernandez for taking these photos!

The King Shepherd as a Rare Breed

The following is information on the background of the King Shepherd breed.

The AKSC registers the King Shepherd breed and issues  individual and unique registration names and numbers for those dogs and their ancestors who are used in the King Shepherd breeding program as well as for puppies that are  produced. The King is accepted by several rare breed organizations which allows the breed to be shown in breed competitions as well as obedience competitions. Interested  individuals typically wish to add a King to their family because of their love for the German Shepherd breed; but are disillusioned of what some German Shepherds have become. Individuals add a King to their family because of the general looks and temperament of the King; not because it is considered as a "rare breed" in many peoples eyes. Most individuals do research on the German Shepherd and the King and find that the average pet price for a well bred German Shepherd of Import lines or show  lines could be well over $1,200.00 and range to more than $4000; the average price for a pet quality King is $1,650.00.

Over the years the AKSC has encountered individuals who  are not in agreement with our goals in producing the King Shepherd. There have been a handful of King owners who are quick to sling negative epithets in our direction because of our beliefs and efforts of our breeding program. The AKSC finds it a bit ironic that many of these same individuals (who question the background of the King), absolutely adore their Kings and continue to exhibit these very same Kings in rare breed King Shepherd shows, specialties and events. The AKSC also finds it very  interesting that these same individuals fail to realize that if  it were not for the AKSC or individuals who purchased their breeding or foundation stock through an AKSC member, they would not own their cherished King Shepherds.

In the final analysis, we should ask ourselves these questions: Do you enjoy your dog? Is it social with you and others? Is it easy to train and control? Is it healthy? Is it a loving and loyal, priceless companion that enhances your  life? If so, owning a King Shepherd has fulfilled its main purpose in your life. That is what it's really all about.